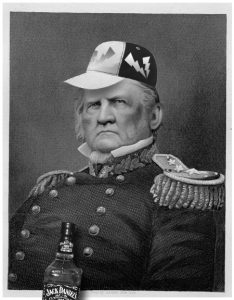 Black Bottle Riot is in the game, but what’s up with that name? Since we get a lot of questions about our name, we’ll come to meet your demands. BBR at your service!

Apart from the obvious mixture of a Southern vibe in “Black Bottle” & the hint of punky energy in the “Riot” part, there’s more to the story. The idea was originally derived from a historical film on the Crimean War, called “The Charge of the Light Brigade”.

Mike, always interested in historical ins & outs, was struck by the insanity of incompetent aristocrats leading the troops. (True, this insanity is of all times.) In the film there are a couple of striking examples of this idiocity, one of which leads to the riot we’ve adopted.

The British troops are having dinner in the warzone and there is champagne for everyone – simply to show off England’s “way of the gentlemen”, even in times of war. To the European super powers, prestige dominated their agendas. This bubbly High Society liquid is not everyone’s cup of tea, so not all men obey. Some dissidents decide to smuggle in a couple of black bottles. (Halfway the nineteenth century, it was quite common to store beer in black bottles.)

In times of war, you’d say there’s more to worry about than troops having a beer. We agree, but the lust for prestige was too strong. The black bottles are not permitted by the leaders and the situation immediately rises to a big riot, involving press and all. Beer wasn’t good enough for the British army.

You still with us?

Now, can you imagine press headlines saying “Black Bottle Riot”? Exactly. That’s when it struck and haunted Mike’s mind. Next thing you know, there’s a Rock ‘N’ Roll Band aiming to fire it up and share a beer with the crowd. So… Now you know… Don’t ask again.