Last week Black Bottle Riot recorded two originals at the Trailer Trash Studios. They’re called In The Balance and Exit Spoiler. Here’s a short studioreport on the three days we spent in the Trailer Trash Hole – shaping sounds, placing mics, having a good time, puttin’ up a fight, smokin’ some, drinkin’ some, puttin’ out a fire, et cetera, und so weiter. That’s how it goes.

After a friday of preproduction and a lot of hassle to get all pre-amps, mics, pc’s and cables in its’ place, we started recording Saturday 10th January. Since we opted for a layered recording session, the thunderdrums of Pieter were first on the role. We took a couple of hours to find to right settings for this session and then Pieter hit it off… Harder than a hammer, tighter than Pamela Anderson’s bathing suit, groovier than Austin Powers. He was done in about fifteen minutes! That’s what you get when you do your homework! One helluva way to start these sessions. 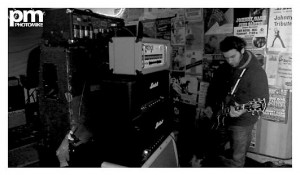 Jaap recorded his bass later that night and – HOT DAMN – he’s got one thunderous sound, friends. He really attacks you. For Jaap it’s the same story as with Pieter: let the tape roll and he will nail it on the spot. We care a lot about the intention with which we play and this is definitely a lively, bad-ass rhythm section we got right here. Not to worry about the intention – nor the ‘meloik‘ they keep supporting every time PhotoMike (who joined us during the session, ’cause he IS our fifth member) flashes his camera.

The second day we planned on recording guitars plus overdubs. We got to the studio ’round 10 A.M. and immediately piled up some amps, lit the tubes and fooled around to get a thick, fat tone. Y’all know we like to turn our amps way up, but believe us when we tell you this was waaaaaay beyond anything we heard before! We really had a Spinal Tap “these go to eleven” thing goin’ on right there. Mike recorded his parts in the – by this time – traditional way: nuthin’ but “one takes” once again. This shit is tight! 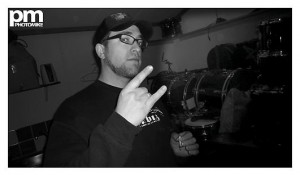 The slide was rippin’, the walls were shakin’ and… the studio was BURNING! NO JOKE. After some time we smelled burning electronica, then the smoke followed and we had to shut everything off. Turned out to be a blank-face connector that couldn’t handle all our equipment… Completely molten. If we hadn’t discovered the fire immediately, this story would’ve been somewhat more grumpy. After this, Simon funked the whole session up by recording one BAD-ASS solo for the boogie of Exit Spoiler and we recorded some additional guitars and percussion.

A couple of days of hard work for just two songs, you say? Damn right. They’re worth it.

Of course, we’re not done yet. Simon still has to do the vocals and this will happen within a week or two from now. After that, there’s some mixing and mastering to be done and we’ll present the tracks to you thru our MySpace. We’ll let you know when to turn it up and blow up your speakers! Here’s a video to keep you busy for a minute or two.