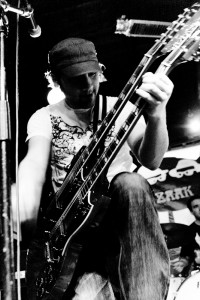 Last weekend we had our first gig with Pieter on drums. It was a cool Sunday Matinee @ De Zaak, Lichtenvoorde, organised by our friend Wout from The Bloody Honkies.

Birth of Joy kicked it off ’round 1700h and they did a damn fine job! Some good MC5 meets Blue Cheer grooves goin’ on right there. After that we had one hour to do our boogie from hell and we literally managed to blow the curls outta some afros (and some stuff fell from the wall and ceiling).

We played a couple of new songs and they kicked some MAJOR butt! Remember the doubleneck attack of ‘You Should Know’ or the heavy boogie of ‘Exit Spoiler’? That’s right. We’ll post some pics of this gig in the multimedia/press section soon. On the left you see Mike slayin’ his brand new axe…

Thanx to all folks who were payin’ their dues @ De Zaak! Hope to see all y’all somewhere in January 2009. How about a rendez-vous in Dinxperlo, Tilburg or Den Bosch?

p.s. We’re planning on recording some new stuff in January. Keep an eye on our website for the latest news!