Last week BBR recorded four originals for their upcoming EP “Stay Hungry”. Here’s some info on the first day in the studio…

We decided to have an early start. While “early” isn’t really a word that fits the band, we managed to get to Hilversum at 10 A.M. sharp. First we had to take all the gear into the studio. Quite a struggle ‘cause we took all the amps and guitars we could lay our dirty hands on. 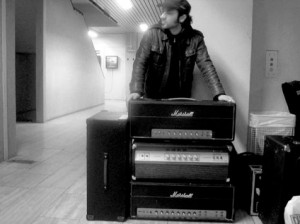 After setting up the amps and guitars we were ready for the soundcheck. Luckily we had the help of two great producer/engineers. Just the kind of guys you need: they take it easy, while we’re getting revved up and excited to lay down the tracks. Nice contrast! Finally, at around 3 P.M. we started recording.

First we played Straitjacket. A heavy, slow groovin’ rocker. The foundations of this song are so heavy it’s just sick. Bass and rhythm guitar just pound away together with the drums. This songs really explodes while it’s approaching the end. Great guitar solos from Mike and Simon.

After Straitjacket we decided to take a shot at Doin’ Fine. This is quite a different kind of song. It’s fast and it’s out of control! An up tempo guitar frenzy that just might remind you of that killer Detroit Rock sound.

Time to take out the Stratocaster, custom fitted with Gretsch pickups by our favourite guitar tweaker Jaap “The Baptist” Lagerweij. Mike took out the slide, and takes you back in time. Stay Hungry is a heavy, dark sounding song. Lyrically it concerns our hunger for new music, old music, experimenting and some good old jamming. We recorded Mike’s slide guitar through four different amps at a time… The tracks are simply ear crushing. Imagine a Fender Super Reverb, a Fender Deluxe Reverb, a Marshall Major and a Marshall Plexi all at full volume!

The last song we did – in about fifteen minutes! – is called Bright Light City. A mid tempo ‘streetlight anthem’ for a night in the city. We might sell it to Frank Boeijen. Would be a straight A.

The recording work is now almost done. The drums, bass and rhythm guitars are solid and sharp. There are still a few things we’ll have to do before it’s done. We’ll be coming back to record vocals, some additional percussion and extra guitar licks. After that, we’ll mix and master the whole shebang. Keep an eye on this site for the latest info!

Yes, we believe this EP will blow the curls out of your mullet.