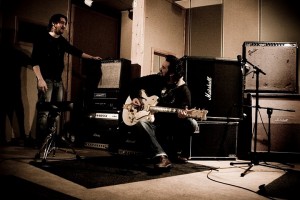 Great news: Black Bottle Riot will hit the studio this December and January!

After a year and a half of playing gigs, jamming in our rehearsal barn and perfecting our sound and songs we’re ready to record our debut album. This means that we won’t be onstage ’till the end of January 2010 (Oudewater Rockcity Fest w/ a.o. Hulkk, Black Bone & Bang Bang Bazooka). We’ll keep you informed on the status of the recordings and the release of this sure-to-be asskicker.

In the last months we did a pile of cool shows @ Popronde, Gesel XL and Polderpop. We tried and tested some new material while still holding some stuff back, only to be heard when the album is finished. Could be you were at one or more of our shows and got yourself a preview!

If you want to catch us live for the last time in the next two months… Get your ass to skatepark Area 51, Eindhoven, November 21st for a night of R’N’R.