First of all: Thanks to everybody who showed up last Tuesday in the NDRGRND in Nijmegen! It was a fantastic evening. As the place was getting pretty packed Lea took the stage. Armed with just her guitar and her voice Lea played a beautiful set. Her songs are breathtaking and she really shines on stage.

As a surprise (without any practice whatsoever) BBR joined Lea to play ‘I Still Miss Someone’ by June Carter and Johnny Cash. Someone in the audience said it really sounded like June & Johnny too. It was a cool way to show the audience that even though Lea plays very calm and beautiful music and BBR plays loud rock we go together like peas and carrots. In the end, there are just two kinds of music. Good and Bad. As long as it’s played with passion and soul, it’s OK! 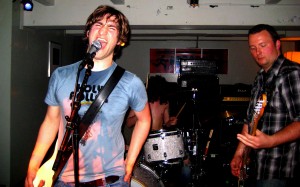 After a short break it was our turn. After the ass kicking show by De Staat just a couple of days before we had to rock da house. We kicked off with the Nijmegen tribute song Bright Light City. The crowd really was ready for a rocking night on the town! The energy! Because of the low stage you are really eye to eye with the people in the crowd. Realizing that the crowd was up for it, we got an extra push to give it the full 100%! We even played ‘Bound To Die’ which we’d just written a couple of days earlier. Some major psychedelic stuff in this brand new rocker. The crowd seemed to really enjoy it. After about 11 songs it was time to round things up. Sweating like pigs and rocking like mad we finished the set with our anthem ‘Stay Hungry’. It was great to see some folks sing along, showing they’re willing to STAY HUNGRY. After the show we had a cool chance to hang out and have a ‘few’ drinks in the NDRGRND. You know how it goes… Ahum. We want to thank you for your support and hope to see you soon! Take care.