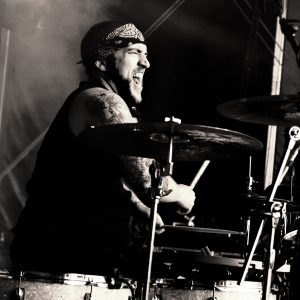 Black Bottle Riot is very proud to announce their new drummer. His name is Pieter Hendriks. Pieter is an extremely talented and experienced musician. You might know him from one of his previous bands (to name a few: Born From Pain, Close Second and Johnny Cash tribute act The Orange Blossom Special).

This is what Jaap has to say about it:

“I’ve known Pieter as a drummer since the late 90’s. I watched him play with his bands and I was amazed by his skills and broad musical interest. This man knows how to play hardcore, metal, country & western and just pure rock music. That really triggered me to get in touch with him about Black Bottle Riot. As a bassist it’s extremely important that the drums and the bass really lock together. After just one rehearsal we were all convinced that he was our man!”

After Tim announces to fully concentrate on De Staat in 2009 BBR decides to take the next step. They knew that one particular drummer would really complete the line up. Broadly interested in different musical styles Pieter fits right in. He really inspires the band to take everything to a whole new level.

“He is such an experienced drummer”, adds Mike. “He has seen the whole world, toured for months in Japan, South America and the USA. I would describe his style as very tight, very heavy and extremely dynamic. He knows how to hit it hard, but also how to take it down a few steps. His style of drumming gives Simon’s vocals and the guitars a lot of space. In combination with Jaap on bass, we’ve got a real thunderous beat! And… What’s really great for a guitar band like BBR: Pieter also is an experienced guitar player as he proves in his band Maaswater Veenlijk. This makes his take on songs different, but better! Plus he’s an extremely nice guy that fits in with the band right away, not only speaking in terms of musicality.”

Pieter’s first gig with the band will be on December 14th @ De Zaak in Lichtenvoorde. We will be playing some brand new stuff too, so this will be a special Sunday!
On November 22nd Tim will play his last show with BBR. This will take place at De Box in Boxmeer, with Heavy Lord and Blindsight. If you want to give Tim a well deserved goodbye, be there!

BBR wishes Tim & De Staat all the luck in the world. We’ll team up with you guys in the future!