Good news, friends! At this moment we’re writing a bunch of new tracks for our third album, which we will record early 2015. As you may know, we like to move everything around a little bit. This means we won’t revisit the exact same paths we already stepped on. Prepare for some tracks that show we’re ready to expand our musical horizon a bit with tougher riffs, more exotic tunings and moody atmospheres.
We recorded our debut solely by ourselves and for our second album we went to producer/engineer Sven Lens. Sebastiaan van Bijlevelt will produce our third album at Galloway Studios. He’s a gentle and out-of-the-box thinking fella, who has worked with our dear friends of Shaking Godspeed and Automatic Sam as well. Release date will be set at mid-late autumn 2015.

WE CAN’T WAIT TO HIT THE STUDIO!!! 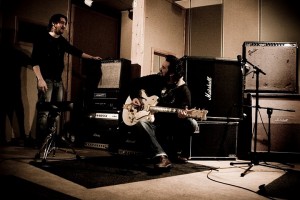